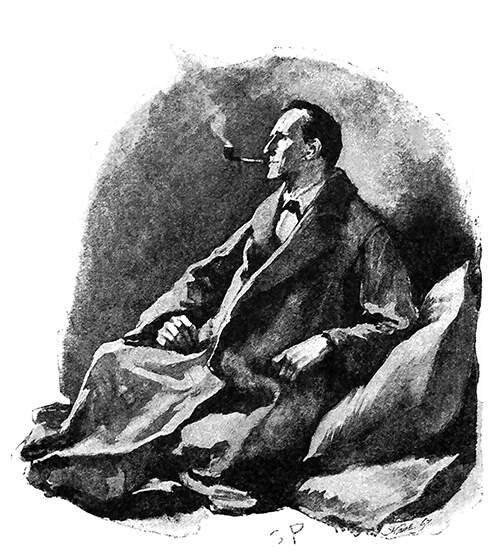 Now, was Sherlock Holmes thinking about the mystery while doing the chemistry experiment? Not in the conscious sense: his goal was to get his mind off the problem at hand, placing the problem on the cognitive back-burner. But if you subscribe to a causal theory of thinking, then you are forced to conclude that he was in fact covertly thinking about the problem all along, even when his mind was focused on test tubes and beakers.

If you prefer to reserve the word ‘thinking’ for ‘introspectable’ experiences, then you have to admit that it is possible for an idea to emerge without prior thinking. You might use a different term for the causal account: you could attribute sudden Eureka moments to unconscious processes.

Scientists and philosophers often sidestep such semantic debates by using or inventing new terminology. That way we have a little more control over the connotative implications of what we say. So people who study mind and brain typically say that ideas and mental states are produced by neural or cognitive processes, and that some of these processes — perhaps the minority — correlate with conscious experience.

If you look into the history of cognitive science, you’ll find that much of the early theorizing about cognition — roughly from the 1950s to the 1980s — involved positing explicit, rule-based manipulation of abstract symbols. This kind of manipulation was sometimes assumed to be conscious. Even if consciousness was not being discussed, in practice the algorithms in artificial intelligence and cog sci required that particular cognitive processes — such as playing chess or solving math problems —be made fully explicit (and therefore conscious) by the researchers. So cognition was at least implicitly linked with conscious experience.

But Sigmund Freud’s ideas about the unconscious were always lurking in the background: many people believed that symbolic and semantic processes could go on without any accompanying subjective experience. These ideas took on new form in the 1980s when connectionism experienced a resurgence: neural networks (including the ancestors of modern Deep Learning systems) could be trained to solve all kinds of tasks without explicit rule-based algorithms or high-level symbols. Nowadays people marvel at machine learning systems that work even though we don’t really understand how. It is as if we are stumbling towards a “machine unconscious”!

Cognition is a somewhat loose concept these days: it includes attention, memory, problem-solving, decision-making, object recognition, and even emotion. Very few people believe that these processes are fully conscious — almost all of them can occur in purely unconscious ways.

So ultimately the question of whether thinking is conscious or not has become a semantic debate with little importance for science: you can pick whichever definition you like. There is no substantive debate about the causal story we tell about mental states: almost everyone agrees that mental states are the result of unconscious processes on some level. Even the most conscious experiences of all — like internal monologues — involve unconscious causes. We have no conscious access to the processes by which our words arise.

The real debates arise on a much more fine-grained level: they involve the question of what specific sorts of neural/cognitive processes produce thought and behavior, and how/why a subset of them seem to correlate with conscious experience.

This originally appeared as an answer on Quora.