No measurable physical quantity is ever infinite. In other words, only theoretical concepts can be definitively labeled as infinite. But that is perhaps an epistemological claim that is unnecessary here. So let’s dive into the nitty-gritty of how visual ‘resolution’ is actually measured. As we shall see, the number of light sensitive cells in the retina does not tell us what the ‘resolution’ of the visual system as a whole is. In some circumstances our visual ‘resolution’ exceeds that of the eye considered in isolation.

Visual acuity [1] is the sharpness with which we can distinguish patterns of light on the retina of the eye. This depends on the exact location of the light falling on the retina. Visual acuity is measured using angles rather than pixels. This is because the pixels of an image do not tell us how far away the image is from the viewer during testing. If we are looking at a blocky pixelated image, the further away it is the harder it becomes to resolve differences between adjacent pixels. What stays roughly constant is the smallest angle subtended by the object at the eye for which the object is recognizable. This angle is what is measured by an optometrist using an eye chart like the one below. The size of the smallest letter that you can make out, measured in inches or centimeters, is not a stable measurement. If you move the chart away, this size will increase. But the angle subtended by the letter at the eye does remain more or less constant as you move the chart away. This is just another way of saying that in order to see details of objects far away, the objects have to be much bigger than they would need to be if they were right in front of you.

The chart below shows how the relative acuity (the “reciprocal of degrees visual angle, divided by the foveal value”) of a single eye varies with respect to position of the image on the retina: 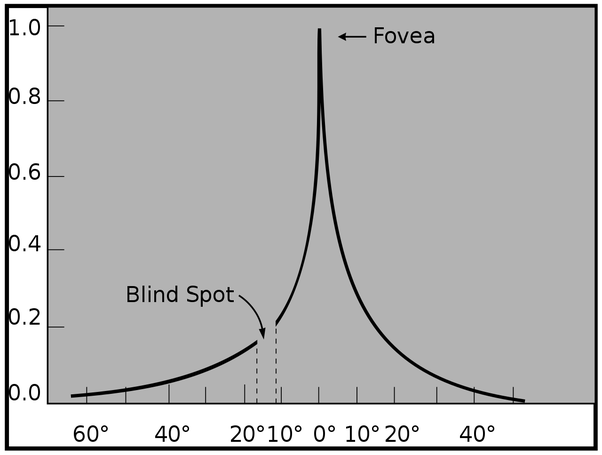 ‘Infinite resolution’ would mean that the relative acuity would blow up to infinity at the fovea — this is impossible, because it would mean that people would be able to distinguish arbitrarily small gaps (approaching zero degrees) between objects. We know this isn’t true.

It is no coincidence that the acuity diagram correlates nicely with the plot of the density of cones as a function of visual angle from the retina — the blue line in the figure below. 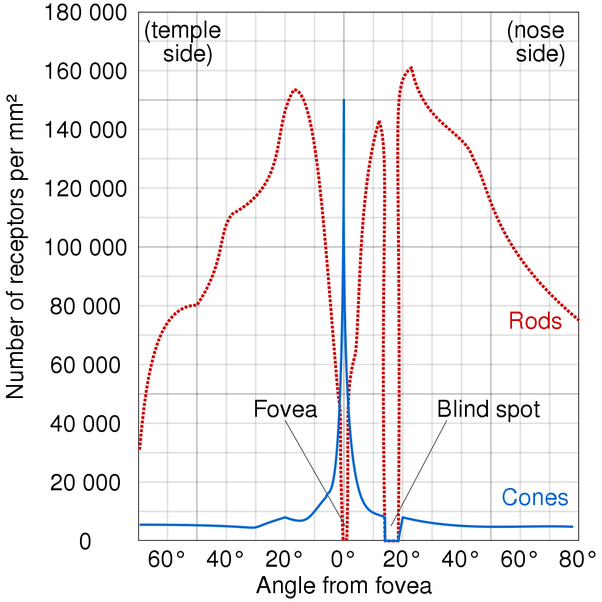 The Wikipedia page on visual acuity quotes some relevant numbers:

But visual acuity is not the end of the story. Humans have what is known as hyperacuity[2] — our visual system can, in some circumstances, exceed the limitations of retinal ‘resolution’.

Hyperactuity depends on the type of visual discrimination task you are doing. One type of task involves measuring vernier acuity[3] — our ability to tell if two line segments are aligned or not.

The smallest visual angle separating two lines that we judge as ‘not aligned’ is smaller than the angle you get when measuring normal visual acuity. Amazingly, this phenomenon — despite being known since the late 1800s — has still not been adequately explained by neuroscience [4] .

This excerpt from a paper [5] about hyperacuity shows how stunning the ability really is:

“While in some tasks (e.g., in telling apart two nearby dots) thresholds are in the range of 30-60 arcsec, in other tasks such as the vernier, the threshold may be as low as 5 arcsec. A threshold of 5 arcsec means that the observer reliably resolves features that are less than 0.02 mm at a 1 m distance, or the size of a quarter-dollar coin viewed at 17 km! One can better appreciate the astonishing precision of this performance by considering the optical properties of the eye. In the spatially most sensitive region of the retina, the fovea, the diameter of the photoreceptors is in the range of 30-60 arcsec and the sizes of the receptive fields of the retinal ganglion cells may be even larger. Thus, humans can resolve detail with an accuracy of better than one fifth of the size of the most sensitive photoreceptor. G. Westheimer coined the term hyperacuity to describe such performance (Westheimer, 1981).” [emphasis added]

So the angular resolution of the human visual system (as opposed to the eye) is better than one would expect if one just made measurements of the responsivity of light-sensitive cells in the eye. This resolution is not infinite, but it’s pretty amazing nonetheless.

The paper I quoted from just now has a very interesting paragraph that gets at the heart of my problem with the concept of ‘resolution’ when talking about the visual system (or any sensory system):

“Visual hyperacuity has been studied by experimentalists for over a hundred years, the first report of vernier hyperacuity dating back to 1892. By now, probably the most interesting point about hyperacuity is that it should not come as a surprise, if considered in the context of the computational neuroscience of the visual system. First, due to the point spread function of the eye’s optics, a very small dot of light projected onto the retina may activate as many as 40 different photoreceptors. Thus, there is no a priori reason to expect a simple relation between the acuity exhibited by the system and the spacing of adjacent photoreceptors. Second, there is no reason to expect identical thresholds for different tasks, unless it is assumed that the first stage of vision, common to all subsequent processing, amounts to an internal reconstruction of the outside world in some unique and veridical way.” [emphasis added]

That last point I highlighted is crucial: human vision is not some kind of information processing of an already ‘given’ retinal image. Unlike in a camera, visual information is constructed actively by the visual system, based in large part on what the organism is doing. From this perspective the term ‘retinal image’ is somewhat misleading. Light falling on a disconnected retina does not produce an ‘internal’ image. And if the eye isn’t constantly making tiny movements (called microsaccades) with respect to the external image, the internal image eventually fades away due to neural adaptation[6] . Vision is much much more than simply piping an image from the eye to the brain. Strictly speaking there is no image ‘in’ the eye.