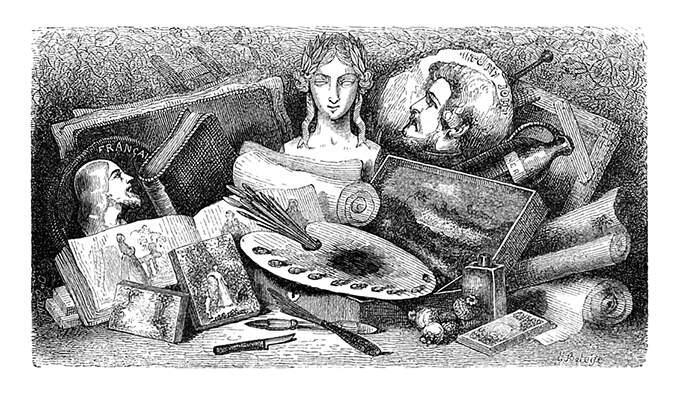 A creative act typically involves combining ideas or perspectives that are rarely found together. This may require stepping back to get a wider perspective, allowing oneself to free-associate, and trusting one’s gut instinct. Neurally speaking, this may require more involvement of the limbic system, as well as certain kinds of modulation of the attentional system. (Note that the limbic and attentional systems overlap to some extent.)

The limbic system is typically associated with emotion, but it is also involved in motivation, imagination and memory. Some parts of the limbic system overlap with the “default mode network” (DMN), which tends to be more active when the “task-on network” is less active. The dorsolateral PFC is part of the “task-on network”, which is engaged when you are doing something specific and goal oriented. The DMN seems to be involved in “housekeeping” — it kicks in when there are no pressing tasks that need to be performed. During this “down time”, the brain can go over memories and imagine future scenarios. Such states may also be conducive to some forms of creativity.

This article has some info on the neuroscience of creativity that aligns with my speculations above:

The Neuroscience of Creativity: A Q&A with Anna Abraham

“The first thing to bear in mind is that it is a massive heterogeneous structure covering about a third of the neocortex and that different parts of the frontal lobes are involved when we engage in creative ideation. Another feature of the frontal lobe function is that damage to different parts of this brain region results in some disadvantages in creative performance but also with specific advantages. For instance, damage to the dorsolateral prefrontal cortex has been associated with more success in insight problem solving and lesions in frontopolar regions with a greater ability to overcome the constraints of salient examples when creating something new.“

One should always take such claims with a large pinch of salt. Just because damage to the dorsolateral PFC improves some kinds of creative problem-solving does not mean that it cannot contribute to creativity.

More generally, neuroscience is not yet a mature science, so almost all findings should be understood as tentative and subject to future correction.