Under this model, it is possible that the primary visual cortex (V1) is the most evolutionarily recent neocortical area, as it is the ‘most eulaminate’ cortex in the primate brain, with strikingly distinct lamina. This claim is where debate may arise, since many people intuitively assume that V1 regions in all mammal species are evolutionarily homologous, and therefore equally ancient. This may not be true — it can be argued that since the V1 of a rodent is structurally simpler than the V1 of a primate, it may be more closely related to the limbic visual areas of primates. In other words, it may be that evolution has promoted complexity in primary sensory areas, and not just in the prefrontal areas at the “top” of each functional hierarchy. Anyway, for now this a potential source of controversy.

My colleagues published a paper on this theoretical framework earlier this year [1] .

Here’s a diagram from the paper, showing the medial (inner) surface of a rhesus macaque brain hemisphere:

According to the Structural Model, the oldest cortex-like areas are in the innermost ring, and more recent “developments” amount to adding concentric rings that grow outwards and laterally from this ancient inner circle.

This figure from an earlier paper [2] shows schematically what the different cortical types look like:

By sheer coincidence, another neuroanatomist and his colleagues published a closely related paper [3] on the very same day!

Here is a highly schematized diagram from the latter paper, representing the same ring-like structure (but based primarily on non-primate vertebrate data). 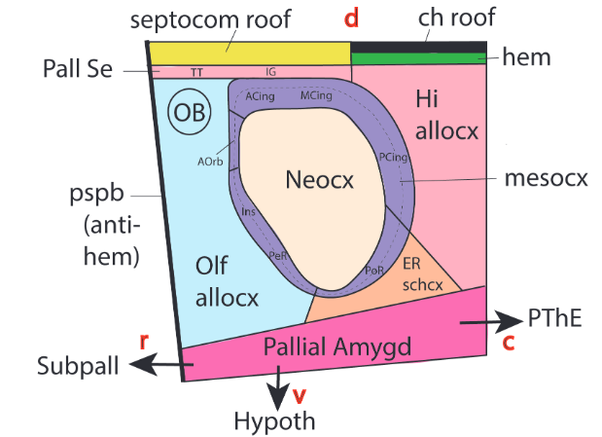 (For reasons that are too complex to get into here, the neocortex is shown inside the purple ring above, whereas in the earlier diagram the newer developments are shown as emerging outside the oldest ring. The discrepancy has to do with the topology of a flattened brain compared to a 3D structure — in actual fact the two diagrams are saying the same thing. Topologically, the neocortex seems to balloon outwards and laterally from “inside” the allocortical ring.)

Note: It is worth pointing out that all brain areas in all animals are equally “advanced”, in that they have all been produced under natural selection, which has been operating since life emerged. So this answer refers to the chronology of emergence of areas, rather than the more vague concept of “advancement”.

A version of this post originally appeared as an answer on Quora.