I was asked the following question on Quora:

Why can’t we see, touch, hear and smell on a cellular level? And what happens if we can?

Here’s what I wrote:

Essentially, we perceive the visible world in the way that we do because of our overall size, the shape of our eyes, and the sizes of objects in the world that are relevant to our voluntary behavior.

This question might seem silly, but a closely related question can serve as a springboard for us to think very deeply about physical scale, and how it relates to biological life and to the very concept of a scientific law.

But first lets deal with the basic question.

“And if I had a microscopic glasses(as if) since child seeing on cellular level, would that be too much for the capacity of the brain?”

When you perceive something or measure it with a device, there is almost always a trade-off between scope and resolution. We all experience this regularly. When you zoom in on Google maps, you get more detail, but for a smaller region. When you zoom out, you get a wider view, but everything is less detailed.

This is also true of measuring devices like microscopes and telescopes. If you want both detail (high res) and a wide view (large scope), then you typically have to piece together multiple narrow high-res ‘views’.

For both humans and machines, the need for piecing together multiple views or ‘snapshots’ of the world relates to a limit on the amount of information that can be processed simultaneously.

I can give you a super-high-res map of your city that is as big as a room, but because of your size and the size and shape of your eyes, only a certain amount of this map can be visible at a given time. This is a physical constraint. You can get around this by standing far away, or by using special lenses.

But there are additional constraints within our visual system. 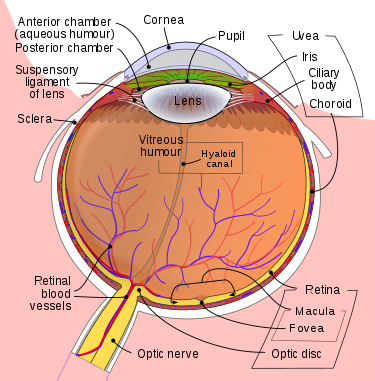 The human eye possesses a region of high sensitivity called the fovea centralis. We can only process detailed visual information if it arrives at this part of the eye. The foveal region is around 2 degrees of arc, which is roughly the width of your thumb when held at arm’s length. Everything outside this region is perceived rather poorly. So it is by moving our eyes that we create a picture of the world.

Now imagine if you had to navigate the world but saw things in your fovea at the resolution of maybe ten or a hundred micrometres, which is the scale of biological cells. All other things being equal — such as body size and movement speed — you would have to look around for minutes or perhaps hours before you got any sense of where you were or what was in front of you. By the end of this period you might even forget what you saw initially!

This kind of visual resolution amounts to navigating the world with a microscope attached to your eyes! You’d have to be extremely still, since any slight movement would completely change what is in your field of view. And random breezes would bring dust particles and fluff into your field of view. It would be mind-numbingly irritating and laborious! 🙂

Perhaps an alternative would be to look at things from thousands of miles away. But that would be pretty pointless for an organism that is meter-scaled, not mile-scaled! By the time you reach your destination, it might not even exist any more!

Here’s another way to think about this: the objects that humans are interested in — food, mates, predators, shelter, clothing — exist on scales far larger than cells. If we ate food one cell at a time, we’d be searching for food all the time, and would probably never even fill our stomachs!

If we were amoeba-sized, we’d be interested in objects that exist at that scale. But we would not see such objects in any normal sense, since as far as we know, vision requires the complex multi-cellular apparatus of the eye and the nervous system.

There is actually a subtle philosophical point that can be gleaned from this line of thinking. It’s probably best to proceed further only if you’ve already understood what I’ve written above, particularly the parts about the fovea and dust.

The physicist Erwin Schrödinger once asked a question that seems equally bizarre, in his book What Is Life?

Why are atoms so small?

What a strange question! Schrödinger refines it by asking why atoms are so small compared to us. His answer, essentially, is that organisms with the kind of perceptual apparatus we possess could only arise if the world in which they live contains law-like regularities that are relatively predictable, and therefore useful for survival. But atoms are governed by quantum mechanics and are unpredictable.

So it would be impossible to live and perceive at the level of atoms. You need to move upwards in scale until regularities start to emerge from the wild world of quantum noise. The world in which regularities become visible is the classical world! Intriguingly, life seems to emerge at precisely the scale at which quantum effects become less common — in fact life may even straddle the worlds of quantum and classical. Photosynthesis involves quantum mechanical processes, and some quantum effects may even occur in proteins and DNA. But multi-cellular life tries to find safe neighborhoods of scale, far away from quantum mischief!

Anyway, if you’re curious, here’s the relevant excerpt from Schrödinger’s book What is Life?

Why are atoms so small? A good method of developing ‘the naive physicist’s ideas’ is to start from the odd, almost ludicrous, question: Why are atoms s o small? To begin with, they are very small indeed. Every little piece of matter handled in everyday life contains an enormous number of them.

Now, why are atoms so small? Clearly, the question is an evasion. For it is not really aimed at the size of the atoms. It is concerned with the size of organisms, more particularly with the size of our own corporeal selves. Indeed, the atom is small, when referred to our civic unit of length, say the yard or the metre. In atomic physics one is accustomed to use the so-called Angstrom (abbr. A), which is the 10^10th part of a metre, or in decimal notation 0.0000000001 metre. Atomic diameters range between 1 and 2A.

Why must our bodies be so large compared with the atom? I can imagine that many a keen student of physics or chemistry may have deplored the fact that everyone of our sense organs, forming a more or less substantial part of our body and hence (in view of the magnitude of the said ratio) being itself composed of innumerable atoms, is much too coarse to be affected by the impact of a single atom. We cannot see or feel or hear the single atoms. Our hypotheses with regard to them differ widely from the immediate findings of our gross sense organs and cannot be put to the test of direct inspection. Must that be so? Is there an intrinsic reason for it? Can we trace back this state of affairs to some kind of first principle, in order to ascertain and to understand why nothing else is compatible with the very laws of Nature? Now this, for once, is a problem which the physicist is able to clear up completely. The answer to all the queries is in the affirmative.

The working of an organism requires exact physical laws

If it were not so, if we were organisms so sensitive that a single atom, or even a few atoms, could make a perceptible impression on our senses — Heavens, what would life be like! To stress one point: an organism of that kind would most certainly not be capable of developing the kind of orderly thought which, after passing through a long sequence of earlier stages, ultimately results in forming, among many other ideas, the idea of an atom.

Physical laws rest on atomic statistics and are therefore only approximate

And why could all this not be fulfilled in the case of an organism composed of a moderate number of atoms only and sensitive already to the impact of one or a few atoms only? Because we know all atoms to perform all the time a completely disorderly heat motion, which, so to speak, opposes itself to their orderly behaviour and does not allow the events that happen between a small number of atoms to enroll themselves according to any recognizable laws. Only in the cooperation of an enormously large number of atoms do statistical laws begin to operate and control the behaviour of these assemblies with an accuracy increasing as the number of atoms involved increases. It is in that way that the events acquire truly orderly features.

You can read the complete passage, which is in Chapter 1 of the book, online here: [What is Life – pdf]