My research is on cognitive-emotional interaction, so I suppose I am qualified to answer this question. 🙂

But my answer cannot be the answer, since there is actually no consensus among scientists concerning the definition of emotions. 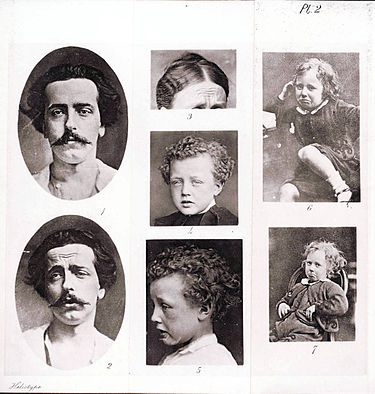 [Illustration of grief from Charles Darwin’s book The Expression of the Emotions in Man and Animals.]

How do we determine an emotional state?

Subjectively, an emotional state is a mental state that seems to involve valence. Valence is the term psychologists and neuroscientists use for the quality of an experience that can be labeled as positive/negative, good/bad, or pleasant/unpleasant.

From an external perspective, emotions are linked with certain behavioral states. Since mental states are invisible to outside observers, behavioral states give humans and other animals clues about the emotional states of other beings.

For example, when a person is crying, frowning, sighing, or showing despondent body language, we infer that they are sad. If they are smiling, energetic, and excited, we infer that they are happy. We may be wrong with our inferences — in fact we often are. But most people are accurate enough to be able to navigate social situations reasonably well. We use similar criteria to infer the emotional states of animals. And in such situations there is no way of asking the animal if our assessment is correct.

Interestingly, there is evidence that in some situations — including disordered states — a person can become unaware of their emotional state. So they might be acting in a way that clearly suggests anger — a loud voice, or agitated movements and expressions — but may deny that they are in this state. (As you might imagine, this is a philosophically complicated zone: how can anyone other than you yourself decide what your internal state is? The answer is that it is complicated, but as a society we do such things in the same spirit that we decide a person is mentally disturbed.)

An early theory of the cause of emotions was proposed in the 19th century by the pioneering psychologist William James, and independently by Carl Lange. The James–Lange theory argued that emotions are a kind of ‘read-out’ of the state of the body. So if something detrimental to survival is happening in the body — anything from hunger to sickness to physical injury — then the brain/mind is notified so that appropriate action can be taken.

This theory is now considered inadequate. It posits a one-way street going from bodily states to mental states. But both evidence and introspection suggest that “top-down” cognitive assessments can modulate an emotional state, so there is no guarantee that a bodily state will produce a given emotional state. This aligns with the two-factor theory of emotion — the two factors being physiological arousal and cognitive assessment.

My thesis advisor had a nice example of the interaction between cognition and emotion. Let’s say you are driving, and a rash driver cuts you off. You might be quite angry. A few minutes later, at a traffic stop, you realize that someone in the back seat is badly injured, and is being rushed to a hospital. The cognitive state induced by this additional information will typically cause the anger to dissipate — often in a matter of moments.

The influence of cognition on emotional assessments of bodily state was vividly illustrated by an experiment from 1962. The experimenters administered adrenaline to the subjects, and divided them into groups based on their knowledge of what had been administered and what the typical symptoms were. A ‘conspirator’ of the experimenters pretended to be a subject, and tried to induce either anger or euphoria in each subject. The subjects who knew that adrenaline was the cause of their elevated heart rate etc., did not become angry or euphoric as readily as the ignorant subjects. (You can read about this study on the Wikipedia page and also at AS Psychology)

No. This is one of the great misconceptions of our era. Emotions are clearly influenced by chemicals such as alcohol, caffeine, and other recreational drugs. And every brain state is associated with a a particular pattern of neuro-chemical release. But we cannot infer an emotion from the “level” of some brain chemical or the other^1.

In fact the very concept of a chemical “level” for the whole brain is somewhat meaningless. Chemical release patterns vary depending on the brain area, so at any given time a brain is a mosaic of chemical “micro-environments”. Moreover, the “meaning” of each micro-environment depends on the specific combination of transmitter receptors found on each neuron.

So an emotion is not just the read-out of dopamine levels or serotonin levels. It is much more accurate to think of an emotion as a whole-brain pattern of electro-chemical activity — reducing a neural pattern to the overall level of one or two chemicals is like reducing a piece of music to the overall volume of the guitars or keyboards^2.

Are emotions the same in all people?

This is a more controversial matter, but there is reason to believe that beyond a few basic core feelings, emotions are actually very influenced by culture. Note that saying something is cultural does not mean that it is not neural: culture influences the very structure of the brain throughout life, starting even before a person is born.

How Emotions Are Made

“Today, the science of emotion is in the midst of a revolution on par with the discovery of relativity in physics and natural selection in biology — and this paradigm shift has immense implications for us all. Leading the charge is psychologist and neuroscientist Lisa Feldman Barrett, whose theory of emotion is driving a deeper understanding of the mind and brain, and shedding new light on what it means to be human. Her research overturns the widely held belief that emotions live in distinct parts of the brain and are universally expressed and recognized. Instead, she has shown that emotion is constructed in the moment, by core systems that interact across the whole brain, aided by a lifetime of learning.” [emphasis added]

^1 I elaborate on this point in the following answers:

Is increased or decreased neurotransmitter (NT) release and binding the primary, or only, thing responsible for what makes us feel emotions (both short-term and long-term)?

Yohan John’s answer to How do the scientists detect chemical im/balance in the brain?

Also see this essay I wrote:

The Chemical Self and the Social Self

^2 I think the musical analogy can be quite helpful. If it isn’t clear, see these answers, where I expand the analogy:

Yohan John’s answer to How could someone calculate our brain capacity & how much it is being used?

These answers I wrote deal with more specific emotion-related questions:

This was written in response to a question on Quora.

One thought on “What are emotions?”