We know that early sensory areas represent external information in a topographic way. For example, localized visual cortical regions respond maximally to particular regions of the visual field, relative to the retina of the eye. This is called a retinotopic map. And in auditory cortex, localized regions respond to particular frequencies of sound tones. This is called a tonotopic map. 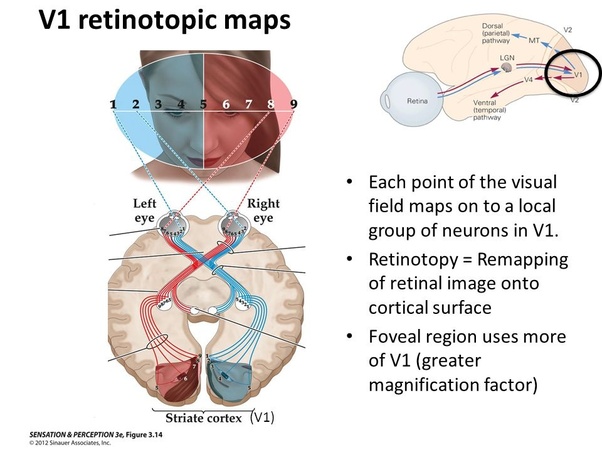 Feature spaces are also useful when talking about spatial navigation. Neurons in the hippocampus and closely related areas fire when an animal is in a particular spatial location. But unlike retinotopic or tonotopic maps, the ‘place fields’ of place cells are not topographic. This means that the cells responding to two adjacent spatial locations might not be adjacent in the brain.

Even more confusingly, when an animal moves from one context to another, the place fields go through a fascinating (and still poorly understood) process called remapping. This means that if two neurons represent adjacent locations in room A, they might represent widely separated locations in room B.

Spatial maps are sometimes seen as a special case of a wider concept called a cognitive map. A cognitive map enables ‘navigation’ in a complex feature space that might have many dimensions. When you think about similarities and differences among songs or books or movies, you are implicitly moving around in a space of unknown, but very large, dimension.

As you go away from the sensory periphery, things become more and more complicated. The concepts of receptive field and cognitive map starts to become harder to map onto what the neurons seem to be doing.

The previous section deals with representation — the “meaning” or “reference” aspect of what neurons do. But we can also talk about neural coding at a more mechanistic level. How exactly does neural activity convey anything in the first place? A neuron is a complex biophysical ‘device’ capable of a dizzying array of dynamic behaviors. The standard response profile of a neuron involves a series of sharp fluctuations of its membrane potential (i.e., voltage). Each fluctuation is called an action potential or a “spike”. A series of spikes on after the other is called a “spike train”. Very fast clumps of spikes are called “bursts”.

Action potentials are what travel along the axon of a neuron, leading to neurotransmitter release at the synapse.

Here things get a bit complicated, so I’ll just mention the basic concepts and provide resources for further reading.

Rate coding is an older approach. In recent years there has been a lot of interest in temporal coding, and in particular in the oscillatory phenomena that are collectively known as “brain waves” or “brain rhythms”. Brain rhythms occur at a variety of timescales, ranging from a few milliseconds to multiple hours. They cause phenomena such as synchronization of firing, traveling waves, phase precession, and other fascinating dynamic patterns.

Evidence suggests that neuronal networks made use of both rate coding and time coding — different brain areas and different neuron types may be more sensitive to one type of coding than the other, but both seem to be important.

On representations and topographic maps:

On spiking, coding, brain waves and other computational concepts:

On neuronal structure and connectivity:

On a philosophical level, I sometimes worry that the term “information” doesn’t help us much in biology. When we say that neurons exchange information, we are avoiding the issue of what exactly information is, and what distinguishes information from any other process.

I discuss some of this in the context of genetics in this essay:

How informative is the concept of biological information?